The main objectives of this CIC are to ensure that ships and shipping companies fulfill their non-delegable responsibility for the safety of operation, improve skills of master and crew of the ship for safety and emergency operation the steering gear, propulsion and auxiliary machinery and minimize the loss of lives and property arising from related accidents.

Shanghai MSA made it clear that a ship which suffers a malfunction of forgoing machinery and poses a hazard to the safety of navigation will be subject to a thorough administrative investigation as well as PSC/FSC inspection. It is advised that serious deficiencies will give rise to detention.

Unlike related CIC launched by several MOUs last year, PSCOs/FSCOs will not apply a questionnaire listing a number of items to be covered during the CIC, but instead they will use a Checklist (Appendix A) issued by MSA which will be helpful in understanding the scope of the CIC.

The listed items are not exhaustive and may be varied to take account of the circumstances of the particular ship or its operations. Experience suggests that when an incident in relation to propulsion and auxiliary machinery failure occurs, the ship will be subject to both investigation and PSC/FSC inspection and it is highly likely that detention is inevitable. Normally, the failure of machinery and proper operation alone at the incident time will only give rise to a request to rectify the deficiency before departure (inspection action code “17”) but a combination of deficiencies of a less serious nature may result in the detention of the ship.

Ship Managers should prepare their vessels for this Concentrated Inspection Xampaign, by assessing the list of items found on Appendix A.

How we may help

SQEMARINE provides guidance based on information and data received from the RiSK4SEA platform for Shanghai Port and related Propulsion and Auxiliary Machinery deficiencies (Appendix B).

I. The Scope of the CIC

B. The targeted ships

B. Main engine and auxiliary machinery 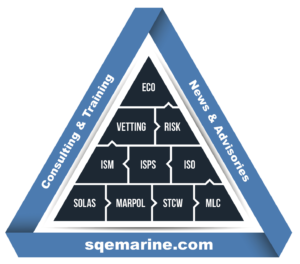